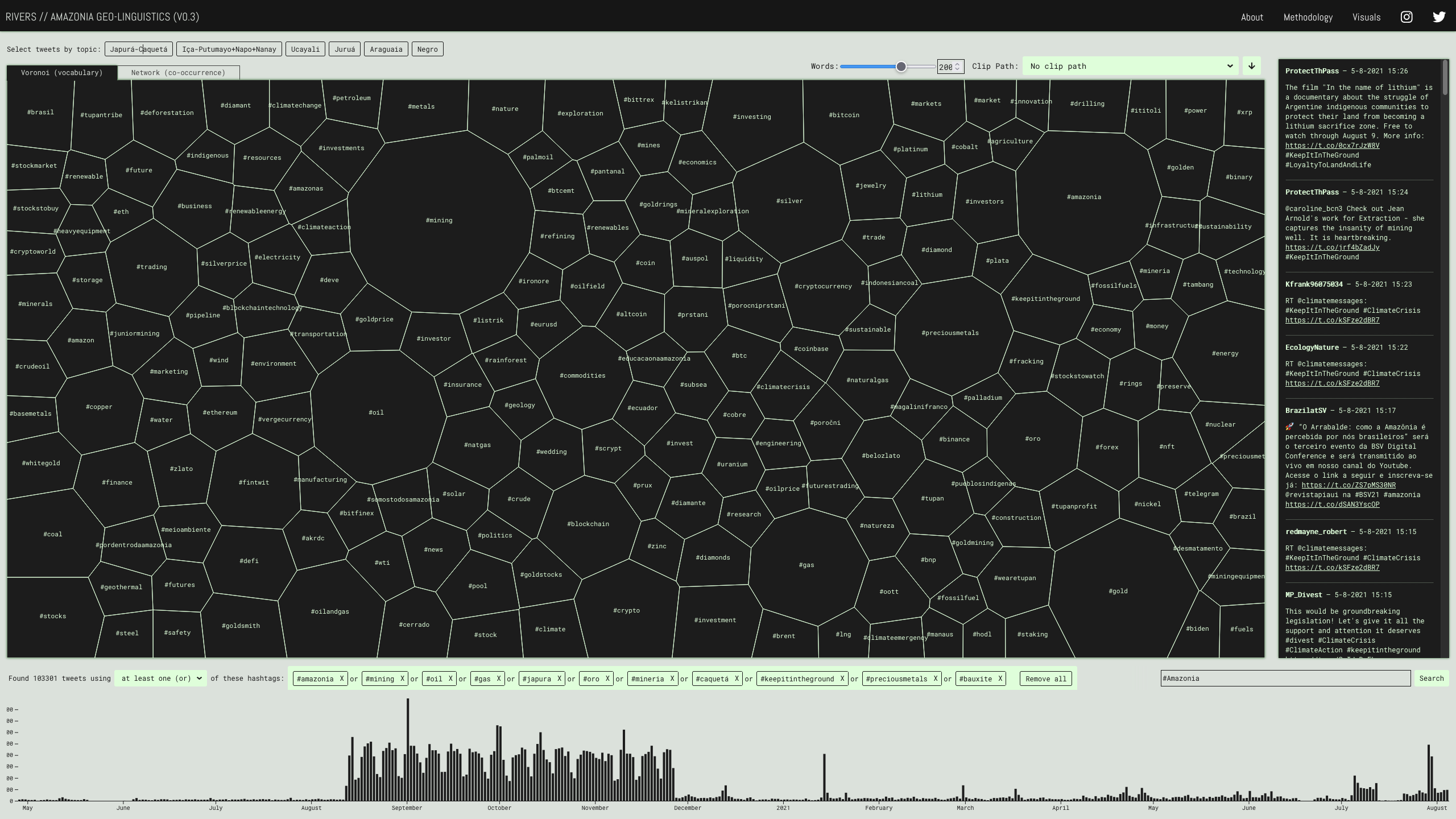 Rivers // Amazonia Geo-linguistics is an experimental research tool that allows mapping information related to the Amazons Rainforest on social media (currently only Twitter). We designed a tool to facilitate analysis and visualisation of semantics used in Twitter in an attempt to comprehend how western societies relate to the complex situation of the Amazons basin. The study wishes to introduce possible perspectives that spotlight the behaviour and conditioning of human societies that use social media and its semantic structures to communicate.

With a humble and empirical approach, we grasp the immense mass of data emerging from Twitter, the hashtags, hashtags co-occurrences and the information contained in the messages where the hashtags are included. This information is continuously archived on a database. We run algorithms on the database to generate statistical data.

The results of this analysis are applied to the geo-referenced marks where socio-environmental threads have been identified, performing experimental interventions on the actual topographic data of the Amazonian territory.

The starting point of the tool Rivers // Amazonia Geo-linguistics was a carefully selected collection of hashtags related to Amazonia. Based on that initial list of hashtags, we started a database that collects all the hashtags occurrences that appeared in Twitter messages.

For example, #Amazonía is used in the following Tweet, published by AMAZON_NATION on the 23-11-2020:

The hashtags present in the Twitter message are included in our database:

Now, these hashtags are part of the database. The application scans Twitter every 30 min. On May 2020 we initiated the database, with an amount of 255 hashtags. Today on January 2021, our database includes 650950 hashtags.

Currently, we perform weekly manual revisions to remove as much noise/irrelevant hashtags from the database. In future development, we will implement machine-learning algorithms that help us maintain an even healthier database.

The database stores the following information: 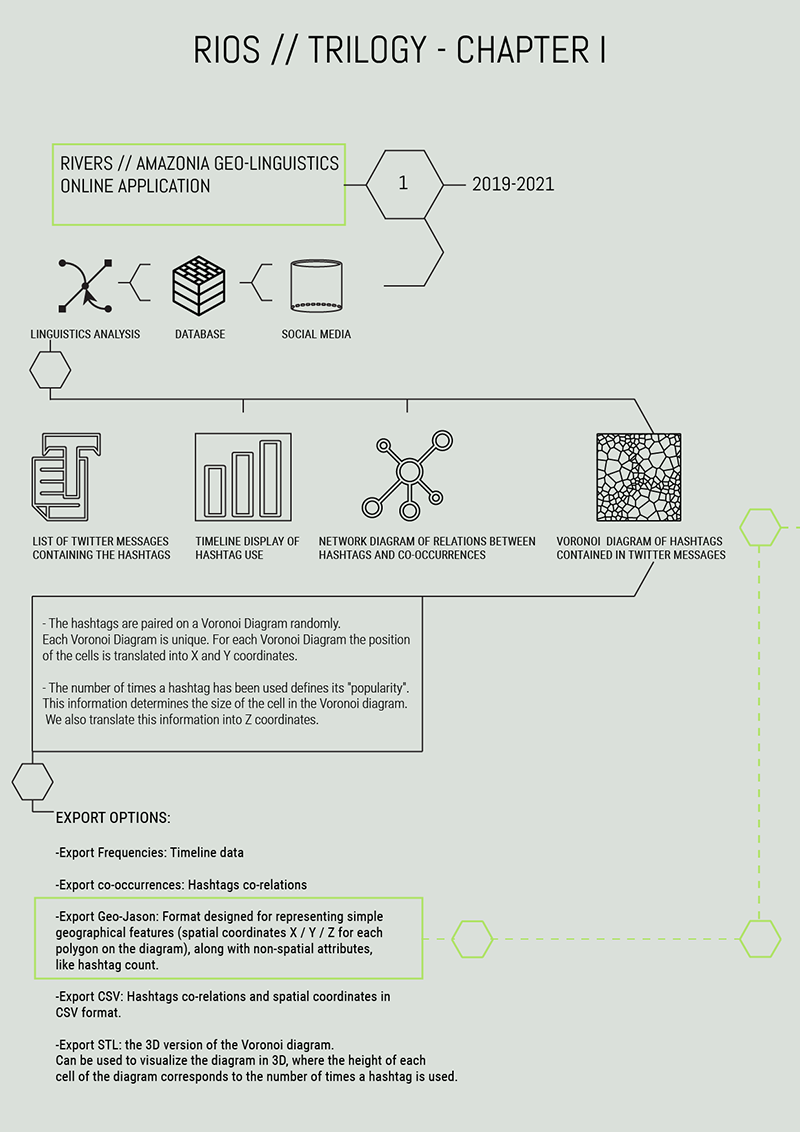 Users can search for hashtags by introducing a word in the search engine, for example, #deforestation
Users can also use the predefined searches, on top of the page.
The search results are displayed on the following panels:

The Voronoi diagram has a series of extra features that we use to create visual interventions onto the geo-referenced marks where socio-environmental threads have been identified, performing experimental interventions on the actual topographic data of the Amazonian territory.
These interventions result in the sculptures proposed in Chapter II: Ríos. 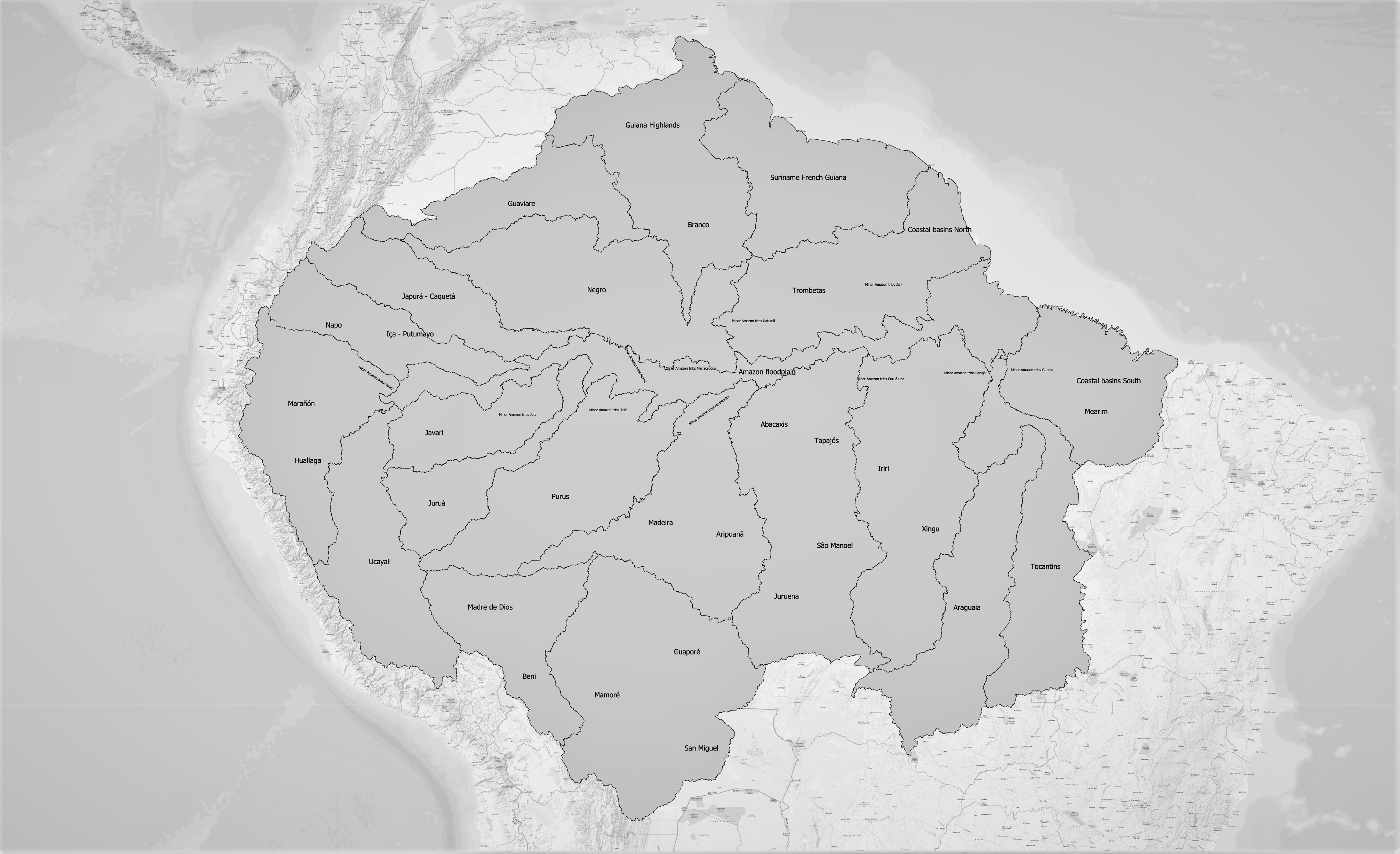 Next to the clip-path function, there is an arrow icon that allows exporting the current Voronoi diagram in various formats: 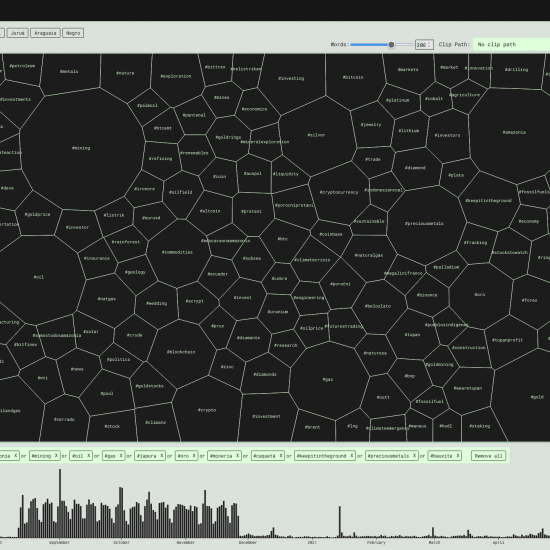 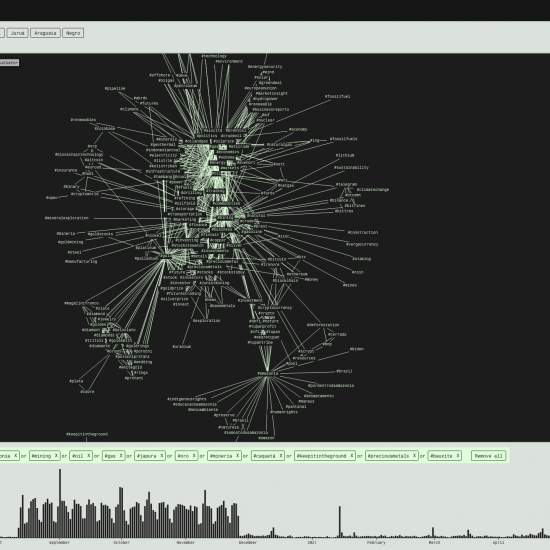 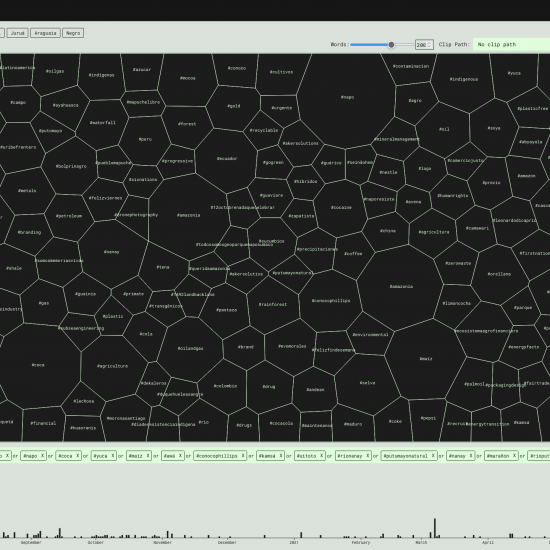 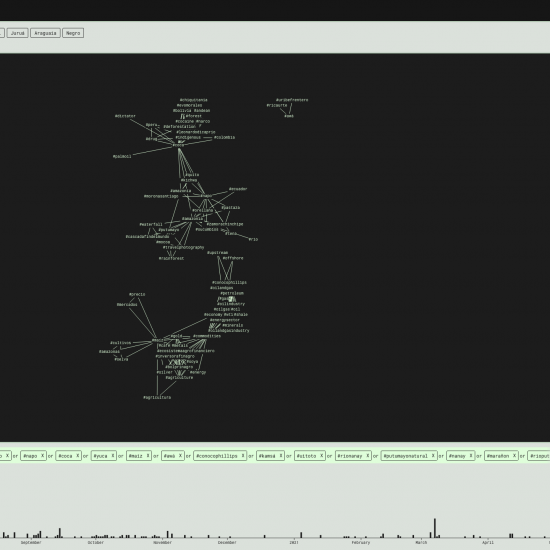 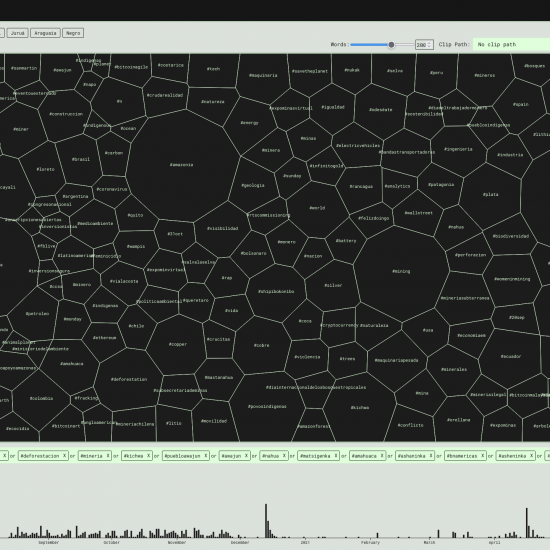 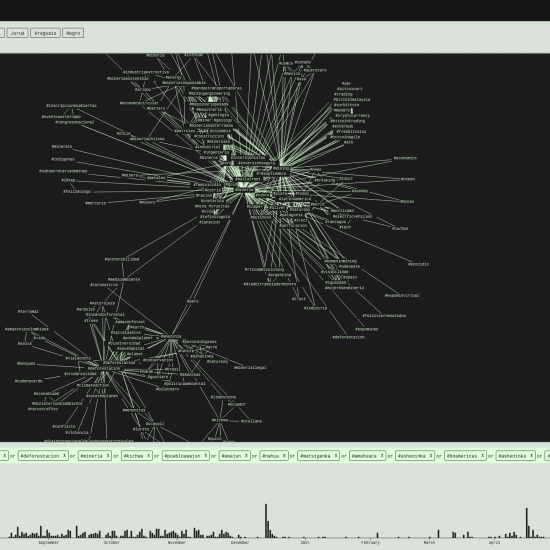 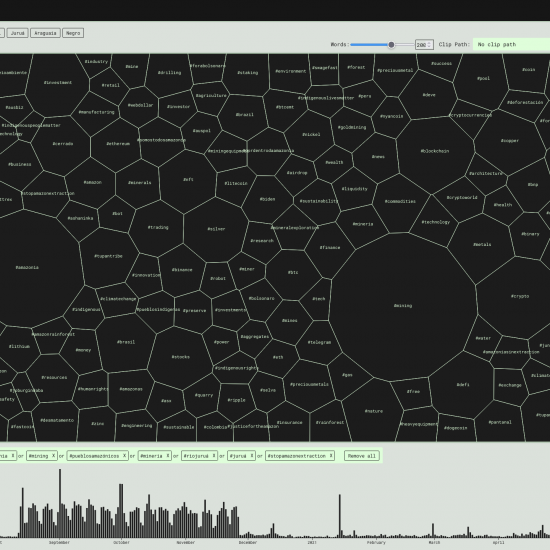 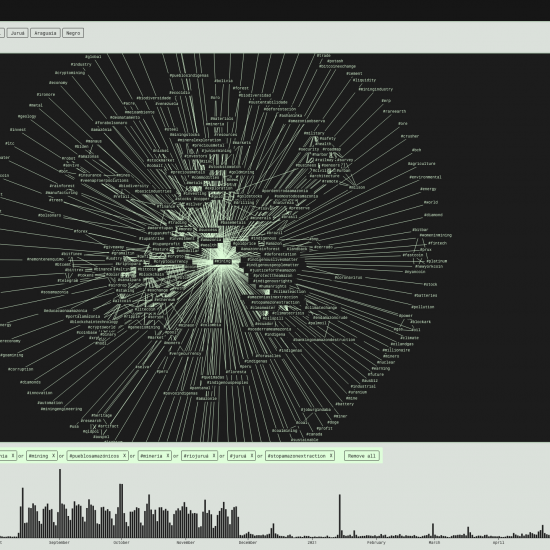 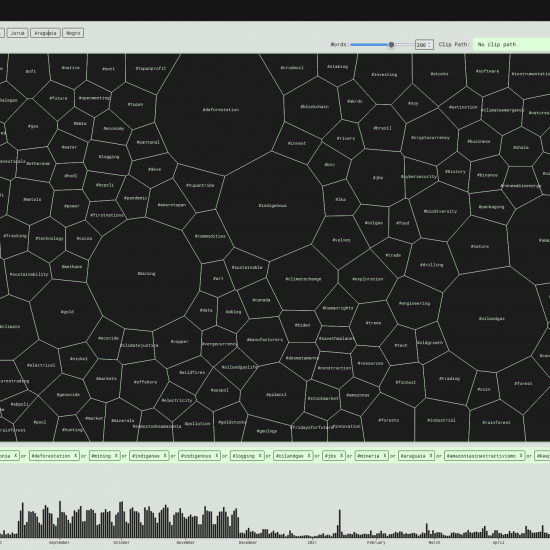 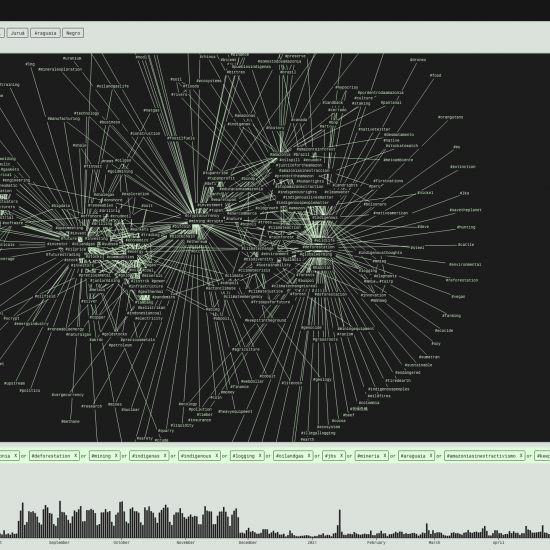 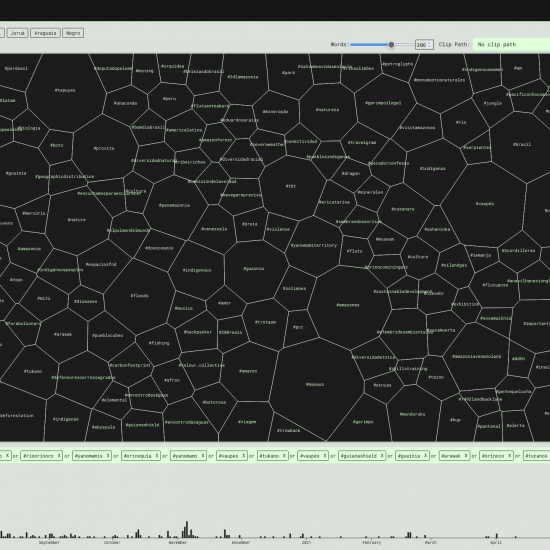 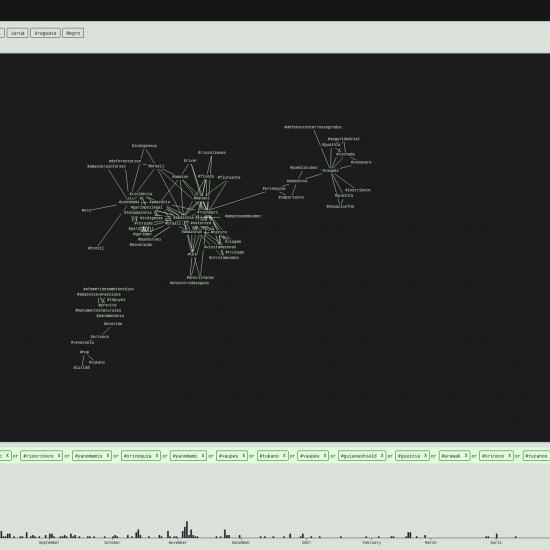