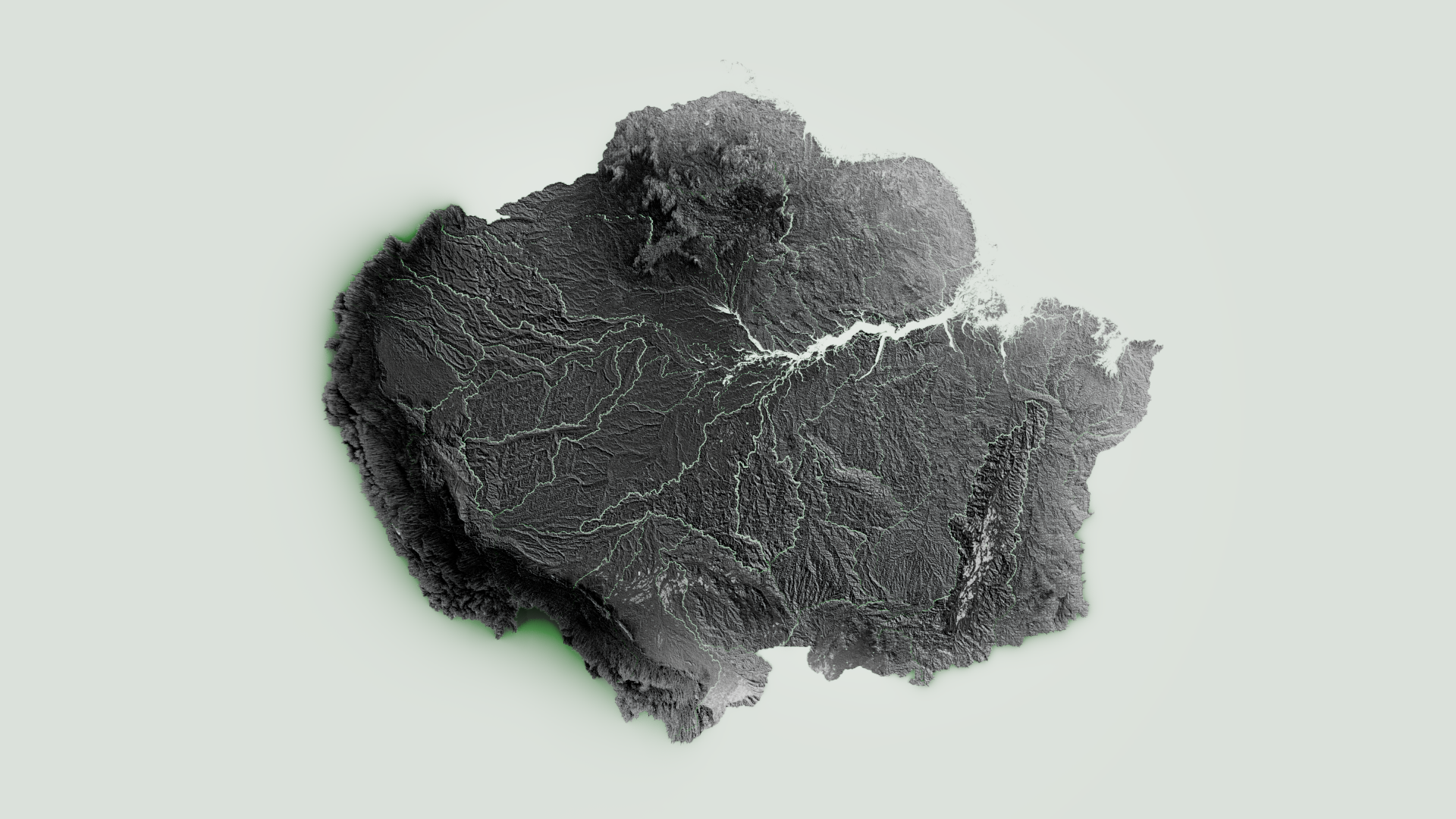 As you read these lines, Amazonia is burning. During August 2018, the news spread fast over social media platforms. Hashtags such as #wildfires #AmazonFires #SaveTheAmazons made their trends for not more than seven days. The #AmazonFires trends were rapidly covered by other trends, Bolsonaro insulting Macron’s wife or by the absurdity of Boris Johnson whims. But the truth is that we are facing an unprecedented catastrophe. Approximately one million hectares of high biodiversity forests have been burned so far since the trend #AmazonFires started. Experts estimate that it would take 200 years for those forests to regenerate.

We witness environmental movements rising all over the globe; citizens are demanding governments to act against global warming, demanding the protection of the species from their imminent extinction. We witness fires rising in different parts of the globe, the poles melting at an exponential speed. Yet, our lifestyles are wholly dependent on the commodities that, in its majority, are the causes of the massive destruction of the Planet. We have created a way of living that is entirely dependent on the extraction of resources from the Earth. As Europeans, we claim for a green deal, but do we understand the consequences that the production of Biodiesel has for the rainforests? When we support electric cars, are we conscious of the amounts of lithium needed to produce the batteries that sustain these systems? From where is this lithium coming, and what are the environmental and social consequences of its extraction? What is the relationship between our daily goods and the ecosystems that provide them?

Amazonia is the largest and most diverse rainforest in the world; the territory occupies 7.8 million km2 and is home to 33 million people and thousands of species. Among its many functions is helping the region - and the entire Planet - to balance the climate, distribute the rains and capture huge amounts of carbon dioxide (CO2), a crucial role to mitigate the effects of climate change. However, deforestation rates in the nine Amazonian countries continue to rise.

The public policies defined by the nine countries that constitute the Amazons Basin differ from one and other, precluding the management of the territory as an entire ecosystem and limiting cooperation mechanisms.  Moreover, there is a persistent view of Amazonia as a remote territory able to provide infinite natural resources with a demographic gap open to new forms of agriculture and extractive colonisation. This view has become more complex over the last 50 years with the new ways in which the region has been integrated into national and international economies. Amazonia is considered at a national level as a territory capable of ensuring energy sovereignty and as a source of income based on the production and commercialisation of raw materials. At the global level, the region is a provider for significant quantities of commodities, while in parallel seen as the most important source of fresh water and biodiversity, as a regulator of the Planet’s climate and as a carbon sink for large quantities of greenhouse gases.

Climate change and biodiversity loss are two of the most critical challenges that we have to address during this century, and facing them requires economic models that prioritise the protection of nature.  In this path, Amazonia and indigenous people have a lot to contribute. I wish that through this development, we can reach into the world, making visible the existing threads that this territory undergoes and the importance of creating an assertive movement towards its preservation.

Ríos is an ongoing research project based on the topography of the Amazon Basin; it explores the relationship between language and the construction of territory. The project introduces a lecture on the topography of the Amazons basin based on observation and analysis of metadata - hashtags from social media, in combination with geo-referenced information related to socio-environmental issues associated with the territory of the basin.

Each sculpture is based on digital elevation models that result from the process of combining:
a) Actual topographic data.
b) Geo-referenced information related to socio-environmental threats.
c) Linguistic analysis from Twitter.

The digital elevation models are used to generate volumetric cartographic representations, resulting in 3D models. The 3D models are printed with the assistance of a 3D printer using clay (porcelain) as raw material. Each sculpture has an approximate size of 40cm x 40cm x height (before kiln). The sculptures have a raw/matte/semi-transparent finishing and will be placed over lighted wooden boxes.

The sculptures are scale models that act as archaeological pieces, as containers, as archives of a historical moment that register the semantic relations between hashtags related to the Amazons environmental and social problematics.

For this purpose, we are using statistical data and geospatial socio-environmental information formulated by the RAISG (Amazon Geo-Referenced Socio-Environmental Information Network / https://www.amazoniasocioambiental.org/en/) that works by mapping the advancement of these threats and the pressures that the region faces. The main threats connecting the ecological and social damage infringed to Amazonia by human extractivist practices include:
The construction of water dams, the extraction of minerals from the soil and the rivers, oil and gas extraction, deforestation of the rainforest to accommodate cattle (beef and leather) and to support the production of soy, palm oil and timber.

The geo-referenced information is combined with linguistic analysis performed by the online application Rivers//Amazonia geo-linguistics:
https://rivers.ulara.org Rivers // Amazonia Geo-linguistics is an experimental research tool that allows the mapping of information related to Amazonia on social media (currently only Twitter). The tool is designed to visualise the complex situation of the territory of the Amazons basin. Its primary purpose is to facilitate the analysis and visualisation of the semantics used in social media. This tool is conceived for environmental & social organisations, activists, artists, researchers, journalists and everybody concerned with Amazonia & climate change.

With a humble and empirical approach, we try to grasp the immense mass of data emerging from Twitter, the hashtags, hashtags co-occurrences and the information contained in the messages where the hashtags are included. This information is continuously archived on a database. We run algorithms on the database to generate statistical data.

The results of this analysis are applied to the geo-referenced marks where socio-environmental threads have been identified, performing experimental interventions on the actual topographic data of the Amazonian territory. These interventions result in the sculptures proposed in Ríos.

Here are some pictures that document the current processes and state of the project. Enjoy, xx, Laura.

These first set of pictures correspond to the sub-basins:  Caquetá (Japurá), Juruá.

The following pictures are taken from the exhibition CODE IS LAW, curated by CARINE LE MALET & JEAN-LUC SORET for the Centre Wallonie Bruxelles - Paris. The exhibition runs from 9th January - 28th February 2021. 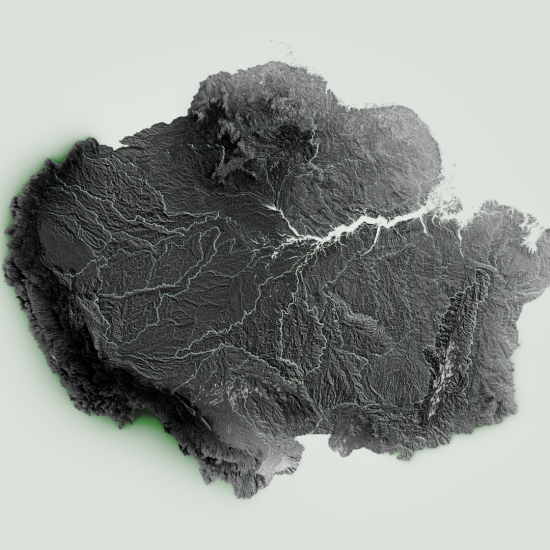 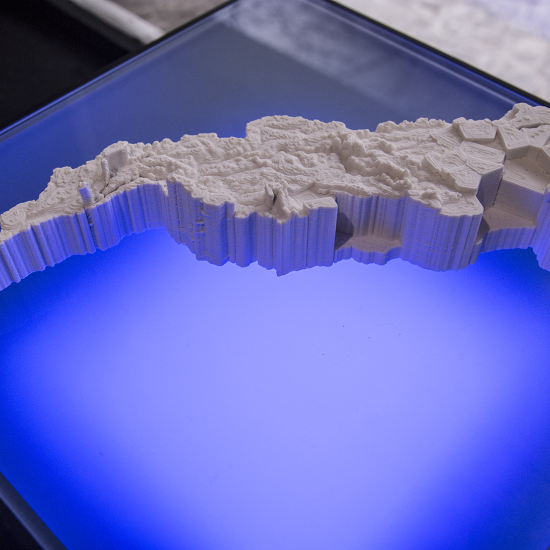 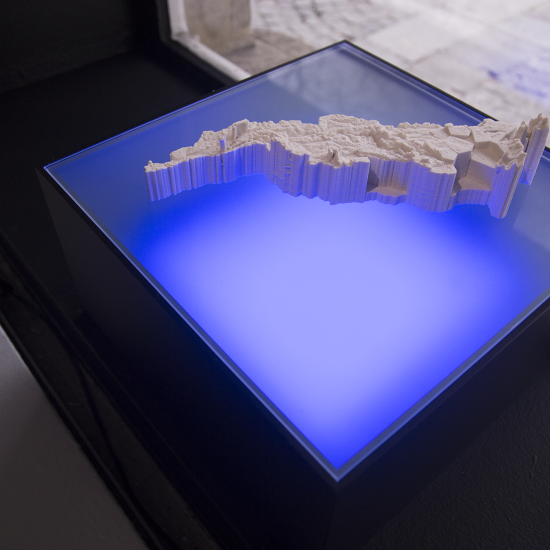 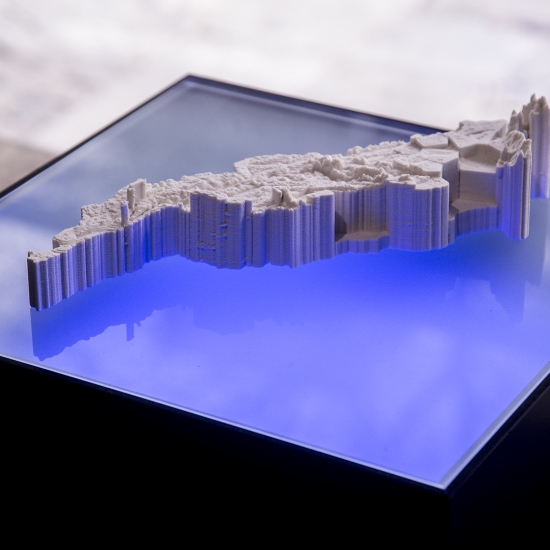 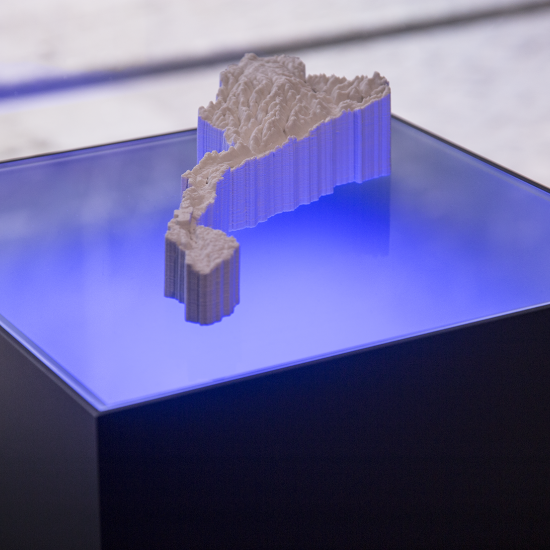